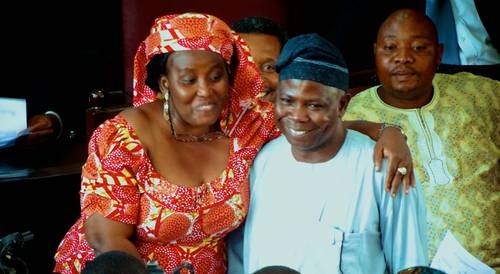 The National Judicial Council (NJC) has queried Olasehinde Kumuyi, the Chief Judge of Ondo State, on allegations that he issued a false electoral certificate and unlawfully swore in the state’s Deputy Governor, Lasisi Oluboyo.

The query was contained in a letter to the Chief Judge of Ondo signed by Justice Mohammed and dated September 17, 2015. Bearing the reference number NJC/S.23/ON.HC/3/1/271, the query letter was titled, “Re: Complaint Issuance of False Public Certificate, Abuse of office and bringing the Office of the Chief Judge into Disrepute against (Hon.) Justice Olasehinde Kumuyi, the Chief of Ondo State”.
‎
SaharaReporters obtained a copy of the letter, which read, “I forward herewith a petition dated September 4, 2015 against you by one Mr. Femi Emmanuel, on the above subject matter. The petition speaks for itself. I shall be glad to have your comments within 14 days from the date of your receipt of this letter, please.”

A correspondent of SaharaReporters reported that disclosed that a lawyer, Femi Emmanuel Emordamori, had on September 4, 2015 filed a petition with the NJC alleging that Justice Kumuyi had acted unlawfully when he swore in Deputy Governor Oluboyo.

The lawyer’s petition accused Justice Kumuyi of abusing his office, thus bringing the office of the Chief Judge into disrepute, adding that the chief judge knew the consequences of his alleged unconstitutional act.

The lawyer’s petition against Justice Kumuyi stated that the chief judge “abdicated that constitutional duty set out in Sections 185 and 187 of the Constitution of the Federal Republic Nigeria, 1999 (as amended) when he [was] personally present to observe the Attorney-General of Ondo State performing the same duty in flagrant breach of the above stated provisions of the constitution during the purported swearing-in ceremony of the incumbent Deputy Governor of Ondo State, Alhaji Lasisi Oluboyo, which took place on 27th April, 2015.”

The petition continued: “Hon. Justice Kumuyi however deliberately or willfully issued a false public certificate claiming to be the person who administered the oath of allegiance and oath of office on the Ondo State Deputy Governor thereby committed a felony contrary to and punishable under Section 105 of the Criminal Code Act which states: ‘that any person who, being authorized or required by law to give any certificate touching any matter by virtue whereof the rights of any person may be prejudicially affected, gives a certificate which is, to his knowledge, false in any material particular, is guilty of a felony, and liable to imprisonment for three years.

“Hon. Justice Olasehinde Kumuyi has consequently abused and brought the office of the Chief Judge into disrepute. It was Justice Kumuyi who personally swore-in Governor Mimiko for his 2nd term in office. He therefore knows his constitutional responsibility in that regard.

“For him to have abdicated or delegated that constitutional duty to the Attorney-General of Ondo State was a gross abuse of office which has brought the office of the Chief Judge into serious disrepute.

“For Hon. Justice Kumuyi to have issued the false swearing-in certificate is therefore a serious and criminal misrepresentation calling for the disciplinary action of the National Judicial Council.

“This petitioner stems from my personal conviction that the oath of allegiance and oath of office on the person of the Governor or Deputy Governor as stipulated in Sections 185 and 187 of the constitution is not a mere formality.

“It is not a trivial matter. It is a serious constitutional issue. I am aware of the public concern and brouhaha over the recent swearing-in of the Governor of Rivers State related to the propriety or otherwise of a person not occupying the offices specifically mentioned in Section 185(20 of the constitution conducting the swearing-in.