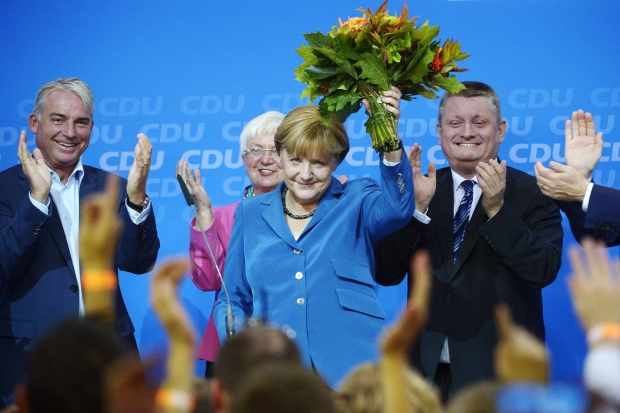 Germany's parliament elected Chancellor Angela Merkel to a third term as the leader of Europe's biggest economic power on Tuesday, nearly three months after an awkward election result forced her to put together a new governing coalition.

Merkel now heads a "grand coalition" of Germany's biggest parties – her conservative Union bloc and the center-left Social Democrats, which are traditional rivals. Parliament's lower house elected her as chancellor by 462 votes to 150, with nine abstentions.

The new government will move Germany somewhat leftward, for example introducing a national minimum wage, but will take a largely unchanged approach to Europe's debt crisis.

The parties' effort to form a government after national elections on 22 September, in which Merkel's conservatives came close to a parliamentary majority but saw their previous coalition partners lose all their seats, has been the longest in post-second world war Germany.

It was extended by the Social Democrats' decision to put the coalition deal to a ballot of all their members. They won approval last weekend but some remain wary because the party emerged weakened from a previous grand coalition in Merkel's first term, from 2005 to 2009.

At least 42 government politicians didn't vote for the chancellor on Tuesday but, given the new coalition's enormous majority, that is unlikely to worry her.

Germany's biggest-selling newspaper, Bild, declared on Tuesday's front page: "Dear grand coalition, we are your extraparliamentary opposition now!" Editor Kai Diekmann wrote that "this parliament is too weak; its opposition too small and too left-wing."

theguardian.com © 2013 Guardian News and Media Limited or its affiliated companies. All rights reserved. | Use of this content is subject to our Terms & Conditions | More Feeds